Paksofto Hybrid mobile applications are developed using a combination of web technologies like CSS, HTML, and JS as same as websites on the internet. The major difference is that hybrid applications are hosted inside a native app which further uses a mobile platform’s WebView. Here, WebView is a chromeless browser window which is typically configured to run fullscreen.

It is not easy to answer the question of how a mobile app is built. Similarly, hybrid mobile apps are no different. A well-written hybrid application should not behave or look any different than its native equivalent. However, users don’t care about it as they only want an app that works well. It is what matters to them. If you are trying to figure out whether a mobile application is hybrid or native, it would be like you are trying to differentiate rare grape varieties of wine.

How are hybrid mobile applications built?

Like other websites are built, hybrid mobile apps follow the same manner. Both are built with a combination of technologies like CSS, HTML, and JS. Generally, a hybrid app targets a Web View that is hosted inside a native container rather than targeting a mobile browser. This allows its users to access various hardware capabilities of the mobile device.

Many hybrid mobile apps today leverage Apache Cordova, a simple platform that consists of a set of JavaScript APIs for accessing mobile device capabilities through plug-ins that are built with native code. These plug-ins include APIs to access device capabilities like contacts, accelerometer, camera, and more. A huge number of plugins are built and maintained by mobile app developers community-at-large which is can be found in the Apache Cordova Plugins Registry. A group of plugins that have been properly tested, documented, and extended can be found at the Telerik Verified Plugins Marketplace.

If we talk about Apache Cordova, it was started as a project named PhoneGap. But nowadays, PhoneGap is considered as a distribution of Apache Cordova which includes additional tools. To know more about its history, you can check out Cordova, PhoneGap, and what’s in a name?

Various application assets like CSS, HTML, JS are packaged via tooling through Apache Cordova for targeting platform SDKs. Once a hybrid app is built, it can be run just like any other app on the mobile device. Apache Cordova provides the tooling that is highly driven by a command-line interface. However, mobile app developers can still leverage IDEs such as Visual Studio and effective solutions like the Telerik Platform to further increase productivity.

Hybrid mobile app development somehow looks appealing to a company’s bottom line such as Why hire a developer for each platform when you can hire one developer and target all of them through CSS, HTML, and JavaScript? But, the reality is a bit more complicated to accept.

Mobile app developers indeed become able to target multiple platforms with hybrid mobile app development. But when it comes to WebView or web runtime, each platform comes with a set of caveats. This is more true for Android and not consistent between OS versions.

Furthermore, there must be some unique capabilities of platforms to which a mobile app developer may wish to target. In such cases, a combination of platform-specific code and plugins must be utilized which will take advantage of those capabilities. Optionally, mobile app developers can take advantage of 3rd party web runtimes such as Crosswalk which can be further embedded into your hybrid applications.

When should you build a hybrid mobile application?

– What are the technical abilities of your mobile development team?

– Which mobile app platforms do you wish to target?

– Are you looking to use the multiple capabilities of the mobile device?

– Do you want to distribute your apps through the app stores?

– Does the hybrid approach live up to its promise in the coming years?

The above questions are needed to be answered properly before the development of mobile apps. You may further evaluate more questions in detail.

WHICH MOBILE APP PLATFORMS DO YOU WISH TO TARGET?

You may have several choices if you want to target more than one platform. This is because the web offers a highly interactive solution for this purpose. However, the mobile browser is your target. HYbrid apps lend itself to this due to its reliance upon the WebView.

On the other hand, Native apps find a unique space among this. You are essentially coupled to this platform if you rely upon platform-specific programming languages and vendor SDKs. For this case, Objective-C or Swift is used for iOS, Java is used for Android, and C# is used for Windows phone.

DO YOU WANT TO DISTRIBUTE YOUR MOBILE APP VIA APP STORES?

If you want to distribute your app via an app store, you must build a native or hybrid app. You can not distribute sites through app stores. Hence, the browser’s address bar is provided for this. Despite this limitation, whether you build a hybrid or native app, it is strongly recommended that you must have a website available for your mobile app. You need to create this because this will be the first place your app users might expect to go in case if they stuck with any problem.

ARE YOU LOOKING TO USE THE CAPABILITIES OF THE MOBILE DEVICE? 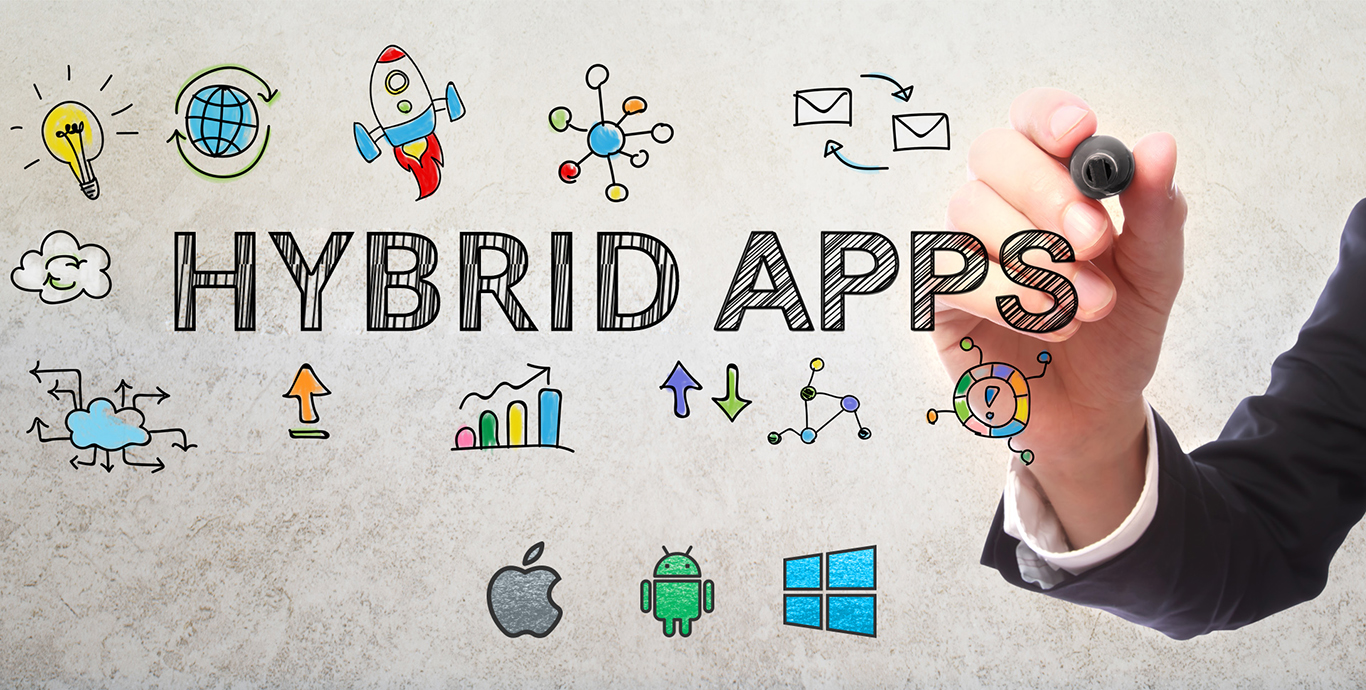 As compared to native and hybrid apps, websites have a limited set of abilities. These limitations are put up by a browser that effectively sandboxing it from the mobile OS. A lot more device capabilities are exposed through HTML5 with the help of recent developments with mobile browsers which include geolocation, camera, and others.

Despite these advancements, support for advanced functionality is still limited. For instance, streaming and media capture are still unsupported in various mobile browsers. Due to these limitations with mobile browsers, many mobile app developers are compelled to evaluate native and hybrid apps as alternatives. These platforms enable mobile app developers to access device APIs. While in the case of hybrid apps, plugins support this capability.

It is often said that native app development is best suited for apps where graphics performance is paramount. The best example is mobile games which completely rely on complex visual interactions on the screen. No matter, how wonderful the game app you have developed for your users and how flawlessly it operates from a functional perspective, you can expect this game app to have a very low app store rating if it is lacking energy. Due to these reasons, mobile app developers have long argued for using a hybrid approach to build their game applications.

However, there exist several solutions for hybrid mobile apps. This includes WebGL and HTML5 Canvas that is well-suited to build game applications. These technologies are most preferred and approachable for mobile app developers due to the presence of libraries like EaselJS, Paper.js, and others. This is not limited to game development only. Developers build more traditional, line-of-business apps by using frameworks like Kendo UI and Famo.us.

WHAT ARE THE TECHNICAL ABILITIES OF YOUR APP DEVELOPMENT TEAM?

The team’s technical abilities is another major factor when it is about to evaluate development options for mobile. To build native applications, you need to hire developers who are proficient and experienced with the programming languages of every platform that you wish to target and platform SDKs. But for building web and hybrid apps, you need to hire developers who use web technologies like CSS, HTML, and JS. You may also have a team that can target more than one platform with a single set of technologies. So, this is worth considering when you have to evaluate your opinions.

DOES THE HYBRID APPROACH LIVE UP TO ITS PROMISE?

Lastly, it is important to know that hybrid is not the be-all and end-all approach for mobile app development. At the initiation of this article, I have thrown light upon the challenges of overcoming the inconsistencies between WebViews. While other challenges remain. With hybrid app development, you can target the various features of a mobile platform to discover if they are inaccessible. This is because plugins used for them can be unreliable, out-dated, or missing altogether. This takes you to the dilemma of whether to remove an application feature or to write the plug-in by yourself.

You may find a hybrid app development model restricted when you have to develop an app that requires numerous native features or an app where performance is critically required for the success of the app. With this situation, you may found yourself to forcefully choose native development technologies. However, these are considered alternative approaches that let you build performant native apps without having core knowledge of tools like Android Studio and Xcode.

Furthermore, the JavaScript-based NativeScript framework allows developers to build Android and iOS apps that forego the WebView for interactive and enhanced performance. NativeScript provides 100% access to Android APIs and iOS, removing the reliance on plugins which prove limitations while developing hybrid apps. But it is also not the be-all-end-all approach for developing native applications. However, this approach to application development is powerful which becomes more powerful with a higher learning curve. With NativeScript, you would not be using HTML to build UI. So, NativeScript is seriously considered by app developers if they have to develop an application with non-trivial performance requirements